Back in the Saddle and Behind the Screen.

As I mentioned yesterday, I was able to get an actual face-to-face gaming group started last summer. No small feat in the middle of COVID-19. But the four of us managed to pull it off. We managed to avoid getting sick by following the basic rule of "if you don't feel well, don't show up." And that worked, so yay on us.

I'm running HackMaster, which should come as no surprise to anyone that has read any of my previous posts. It's the longest campaign I have ran since I ran Shadowrun in the 90s. At least this time the party is more consistent.

The campaign in a nutshell. There are two nations: The one to the north is dealing with orcs coming from the north, and the one from the south is dealing with hobgoblins coming from the south. These nations help each other, but it's not an easy alliance. The hobgoblins from the south have made contact with the orcs to the north, and are now sending supplies and troops in an effort to mount an orc/hobgoblin offensive at the border between the two nations in order to force both armies to fight on two front. That was a run-on sentence. Our heroes just happen to be at the border between the two nations and have just discovered what is going on.

Now they have to find a way to stop it.

Who is the Weekend Wizard? 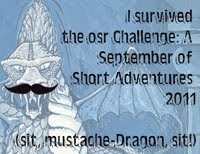